When most people think of where we get our oil, they primarily think of the Middle East. The tar sands of northern Canada or domestic fracking also come to mind. But drilling for oil in the Amazon? Not likely. Surprisingly oil extraction in the Amazon is rampant, and expanding. And it’s the worst possible place to be drilling. But who’s consuming the oil produced there? We are. Amazon crude is coming to California and the rest of the United States in record levels.

Amazonian peoples, many of whom consider oil to be the blood of Mother Earth, have long called on governments and corporations to keep it in the ground. Now scientists are catching up with their calls, stating that we need to keep 80% of fossil fuels in the ground in order to have a good chance of averting catastrophic climate change. As our planet’s most important carbon sink, the home to over 400 distinct indigenous peoples, and the world’s most biodiverse rainforest, it is urgent that we keep the oil in the ground in the Amazon.

Amazon Watch is committed to supporting and amplifying the calls and proposals of our indigenous allies from the Amazon by ensuring that global governments and corporations respect their rights and territories. Based on the findings in our report FROM WELL TO WHEEL THE SOCIAL, ENVIRONMENTAL, AND CLIMATE COSTS OF AMAZON CRUDE, we call upon companies, universities, and governments to heed their call and change their vehicle fleets to Amazon-free fuel sources. By keeping the oil in the ground in the Amazon, we can contribute to the protection of the Amazon rainforest, indigenous peoples territories, and our global climate.
Date unknown Format Cartoon and Animation
Length unknown Keywords SustainabilityMember of Special Collection Clean Trade More Details
Email a Friend
Trending Story - Climate Risk Disclosure by Mark Trexler

Exploring the evolution of risk disclosure thinking, and where it should head in the future. To jump to the right spot in the Climate Web to further explore the topic, use this link.
EarthSayer Mark Trexler
Date unknown Format Series
Length unknown Keywords Sustainability More Details
Email a Friend
Sustainability Pioneers 3: It Takes a Village

Sustainability Pioneers' It Takes a Village is a story about community power. Documentary filmmaker Kirsi Jansa visits two communities, Butler in Pennsylvania and Balcombe in the UK. In Balcombe oil and gas industry wants to drill and frack, and in Butler the shale gas development is in full swing. In both places some local have visions for a different kind of a future.

Josh Roberts, an environmental lawyer from Client Earth talks about community power. Community power is a new energy system based on renewable energy that benefits the largest number of people.

Part 2 of Sustainability Pioneers visits two companies and a private citizen who have already started building a bridge to a renewable energy future. Companies featured are:

Scalo Solar Solutions is a privately-held solar developer headquartered in Pittsburgh, Pennsylvania. Scalo Solar utilizes solar technology and other sustainable building solutions to create opportunities that make sense for the environment and the bottom line.

Become a Sustainability Pioneers supporter and make a tax-deductible donation at sustainabilitypioneers.com. Thank you.

Sustainability Pioneers, a series of short documentaries on the transition to sustainable energy, begins looking at how energy is being produced in Pennsylvania in 2014. How does our energy use affect air, climate and public health?

The price of oil keeps slipping to new lows not seen in years. What does that mean for oil producers, big oil companies and you the consumer? CNBC explains.Published on Dec 14, 2015.

Excerpt of Professor Leif Wenar's presentation in Seattle, Washington on January 27th, full speech here. Leif is author of the book, Blood Oil: Tyrants, Violence, and the Rules That Run the World.In this excerpt from his presentation of January

He holds the Chair of Philosophy & Law at Kings College London. After earning his Bachelor degree from Stanford, he went to Harvard to study with John Rawls, and wrote his doctoral thesis on property rights with Robert Nozick and T.M. Scanlon. He has worked in the UK since 1997. This excerpt was produced by Ruth Ann Barrett of EarthSayers.tv, Voices of Sustainability as part of a blogpost, Sustainability Advocate. Visit the site, Clean Trade (http://cleantrade.org/) to become involved in this movement.

An excerpt from the Leif Wenar speech of January 27th, 2016 based on his book, "Blood Oil: Tyrants, Violence, and the Rules That Run the World." For more details on 'Might Makes Right' go to the Clean Trade site, here. Excerpted and curated by Ruth Ann Barrett for EarthSayers.tv, Voices of Sustainability. 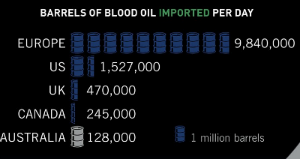 The Biote D'Or experience with the Kimberley Process Certification Scheme (KPCS). It is a control system established in 2003 to authenticate the provenance of diamonds. After it became known in the late 1990s that warring parties were abusing the trade with rough diamonds to fund their conflicts, this initiative was founded to put an end to the sale of so called blood or conflict diamonds. Today, more than 49 countries are part of the Kimberley Process, the European Community being counted as one member. The members commit themselves to strict rules and regulations to verifiably track the legitimate provenance of each diamond. Further detailed information about the Kimberley Process here.

On January 28, the leaders of different indigenous nationalities directly affected by the contract between Ecuador and Andes Petroleum held a press conference in Quito to publicly announce their position that the government process of consultation has been illegal and illegitimate and that they reject the plans for oil exploration and exploitation in blocks 79 and 83 and reject plans for additional oil development in the South-Central region. Read more here on the Pachamama website, the publishers of this video on their YouTube channel.

This is the testimony of Manari Shigua of the Sapara people of the Ecuadorian Amazon.His testimony addresses the designation of the Sapara peoples culture a masterpiece of the Oral heritage of humanity by UNESCO which acknowledges that all resources in t heir territory (trees, mountains, oil +) are the world's heritage. The Ecuadorian government wants to exploit these resources and must understand they are required to consult the world as no resources can be exploited in their territory especially those the people oppose.