As part of the InterFaith Call to Inclusion, we interviewed Grace Eagle Reed in Portland, Oregon. Grace was born into Tsa La Gi culture and was adopted by Lakota Grace Spotted Eagle and taught traditional ways. Produced and videotaped by Ruth Ann Barrett and Barry Heidt of EarthSayers.tv, Voices of Sustainability, November, 2016 in wake of the 2016 Election.

Known to many as Nii Gaani Aki Inini (Leading Earth Man), Dave Courchene has touched many lives through his teachings. Choosing to leave a successful career, he has devoted himself to learning the knowledge and traditions of Indigenous People. A respected Elder, his work has been seen around the world. Serving as a member of the

Wisdom Keepers of the United Nations since 1992, he has acted in an advisory capacity to the UN in areas of spirituality and sustainable environmental approaches. In his efforts to bring message of peace and hope to the world, he founded Turtle Lodge in 2002. The lodge has since earned an international reputation as a place of learning, healing and sharing for all people. In efforts to continue carrying the message of peace across the world, he has most recently shared the stage with the Dalai Lama.

Randy Woodley is a descendent of the United Keetoowah Band of Cherokee Indians. He and his wife Edith lead a local Native American gathering at their home. They’ve developed a holistic model of service among Native Americans, out of which grew a 50 acre sustainable farm and Christian community. In this community, the Woodleys taught sustainability, eco-justice, microeconomics, leadership, and mission. In 2008 they gave up their farm and were forced to disband the community due to violence from local White Supremacists.

Graham Hill is the Founder and Director of The GlobalChurch Project, and Vice Principal of Morling Theological College, Sydney, Australia.

Global Center for Indigenous Leadership and Lifeways President Ilarion Larry Merculieff (Aleut) talks about his life, culture and knowledge as an indigenous leader. At the AASHE 2015 Conference and Expo he shared his perspective and vision for transforming sustainability education. January 5, 2016

"The world needs you, badly," begins celebrated biologist E.O. Wilson in his letter to a young scientist. Previewing his upcoming book, he gives advice collected from a lifetime of experience -- reminding us that wonder and creativity are the center of the scientific life. (Filmed at TEDMED.) Published on Jun 25, 2012
EarthSayer E.O. Wilson
Date unknown Format Speech
Length unknown Keywords SustainabilityMember of Special Collection Leadership Development More Details
Email a Friend
Robin Kimmerer

Dr. Kimmerer is a mother, scientist, writer and Distinguished Teaching Professor of Environmental Biology at the SUNY College of Environmental Science and Forestry in Syracuse, New York and the founding Director of the Center for Native Peoples and the Environment whose mission is to create programs which draw on the wisdom of both indigenous and scientific knowledge for our shared goals of sustainability.
EarthSayer Robin Kimmerer, Ph.D.
Date unknown Format Teaching
Length unknown Keywords SustainabilityMember of Special Collection Robin Kimmerer, Ph.D. More Details
Email a Friend
Mishkos Kenomagwen: The Teachings of Grass by Dr. Robin Kimmerer -

Indigenous peoples worldwide honor plants, not only as our sustainers, but as our oldest teachers who share teachings of generosity, creativity, sustainability and joy. By their living examples, plants spur our imaginations of how we might live. By braiding indigenous
Traditional Ecological Knowledge (TEK) with modern tools of botanical science, Robin Kimmerer, professor of Environmental Science and Forestry, of Potawatomi ancestry, explores the question:If plants are our teachers, what are their lessons, and how might we become better students?
Since 1990, Bioneers has acted as a fertile hub of social and scientific innovators with practical and visionary solutions for the world's most pressing environmental and social challenges.

An excerpt from Dr. Kimmerer's speech at the Center for Humans and Nature's 2014 Forum on Ethics & Nature hereon EarthSayers.tv. This excerpt focuses on her discussion of The Honorable Harvest as a guide to living sustainability. Published on Mar 15, 2016

This video series captures moving and thoughtful reflections from the biennial Geography of Hope gathering in Point Reyes Station, California. Dr. Kimmerer's presentation is around the theme, "Mapping a New Geography of Hope: Women and the Land."Published on

To order her book, Braiding Sweetgrass, from Amazon click on the image or visit your local bookstore, or borrow from your library.

Dr. Robin Kimmerer is a mother, plant ecologist, writer and SUNY Distinguished Teaching Professor at the SUNY College of Environmental Science and Forestry in Syracuse, New York. She serves as the founding Director of the Center for Native Peoples and the Environment whose mission is to create programs which draw on the wisdom of both indigenous and scientific knowledge for our shared goals of sustainability. 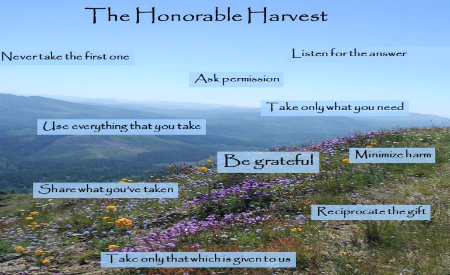 She addressed the attendees at the Center for Humans and Nature's 2014 Forum on Ethics & Nature held at the Chicago Botanic Garden. The theme for the conference was "A Cascade of Loss, An Ethics of Recovery." The Forum explored the topic of extinction, balancing information with ethical reflection about the possibilities of biodiversity and biocultural recovery. For more video visit here. Published on Aug 6, 2014